A couple of years ago, the then owners of a house in Lucks Lane were kind enough to give their old title deeds to the History Society and this allows us to construct the history of the house from the mid-19th Century.

The first document is an Admission dated 22nd November 1861. Charles Mehew, a harness maker sold a house in Lucks Lane to Thomas Adams, a baker, for £220. Thomas must have been quite a successful baker to be able to pay that much. £220 may seem quite a substantial sum for a smallish cottage, but the sale included just under an acre of land at Hardwick Dene (spelt DEAN). 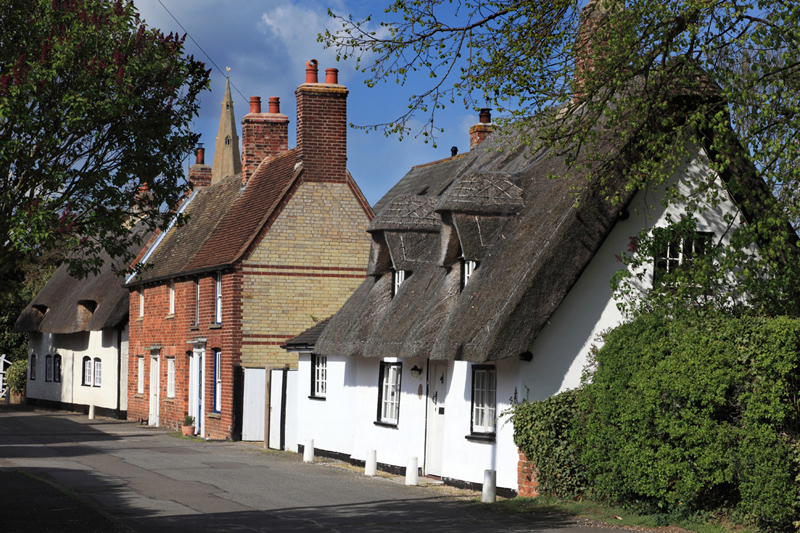 Charles owned the Copyhold in the property. That means that the freehold was owned by the Lord of the Manor, in this case the Ecclesiastical Commissioners for England. In law Charles was the tenant of the Lord of the Manor, although in practice he was free to sell it or deal with it as he wished. He did however, have to pay a rent of 8d (about 3p) per year.

So, the Admission records the transfer of the Copyhold from Charles Mehew to Thomas Adams.

The transfer took place at The George Inn, Buckden, where there was held the “Court Leet and View of Frankpledge with the General Court Baron and customary court of the Ecclesiastical Commissioners for England lords of the said manor.” It was held in the presence of Henry Pearson Gates, gentleman, Steward to the Lords of the Manor.

The Manorial Courts were a hangover of the feudal system of courts. They were the lowest courts in the land and dealt mainly with civil matters over which the lord of the manor had jurisdiction – including land ownership.

One of the main functions of the Court Leet was to admit new tenants who had acquired copyholds by inheritance or purchase, for which the new tenant was required to pay a fine to the lord.

Copyhold simply means that the tenant received a copy of the relevant entry in the manorial court roll, made on his “admission” to the roll. The court roll was maintained by the Steward.

But in manorial courts, in addition to the Lord of the Manor, there was a representative group of tenants known as the Homage, whose job it was to make representations to the court and to act as a jury.  I imagine it was quite a popular job, as Thomas Adams probably bought them all a drink for their trouble.

Frankpledge was an arrangement by which the heads of each household in a tithing were judicially bound to each other. A tithing was a group of about 10 households. The system created collective responsibility for behaviour of all the people in the tithing. This obligation was monitored by the Hundred Court in a process known as View of Frankpledge.

In 1861, life was not so simple. The first step was for the seller to Surrender his copyhold to the Lord of the Manor. The actual sale transaction was almost entirely conducted by word of mouth. It is for this reason that the wording recording the transaction starts:

“The Homage present a certain Absolute Surrender taken out of court in the words following “Be it remembered that ……..“”. In other words, this is just a record of a transaction that has already taken place between the parties.

Generally, a sale of land took place on or within sight of the land being sold. The seller would give to the buyer a handful of soil, taken from the land, or perhaps the keys to the house, or some other physical representation of the property. That constituted delivery of the property. The buyer then handed over the purchase price – in cash. So in this case possibly 220 gold sovereigns.

The seller might show he had given vacant possession in one of a number of ways. One was by jumping over a hedge on the boundary to the land. Another was to give the buyer a rod. More than once in this document the words “by the rod” are used.

Thomas wanted to be really sure Charles acknowledged he had been paid in full, so the Admission includes this receipt: “to him [Charles Mehew] in hand (i.e. in cash) well and truly paid by Thomas Adams of Buckden aforesaid a Baker at or immediately before the signing or passing of this Surrender the receipt whereof the said Charles Mehew doth hereby acknowledge and of and from the same sum and every part thereof doth hereby acquit release and forever discharge the said Thomas Adams his heirs executors administrators and assigns”

“the receipt of which is hereby acknowledged”  - 7 words.

The house is described as “all that messuage cottage or tenement” in Lucks LAND – not Lucks Lane. formerly in the occupation of Sarah Moles widow, deceased, then of Thomas Mehew, also deceased, the father of Charles, the seller, who inherited it in 1827. In those days, when everyone knew everyone else’s business and the village was a small community, such a description sufficed as the Homage, and probably the Steward as well, knew exactly who owned what and which cottage was being sold.

“and now unto this Court cometh the said Thomas Adams and humbly prays to be admitted tenant” with “fealty, suit of Court and all other customs and services therefore due and of right accustomed and he hath paid the Lords his fines and is admitted and hath done fealty.”

In 1869 Thomas died and his widow, Susannah inherited it and was admitted copyhold tenant to the property.

Then in 1873, Susannah sold it to Frederick Middleton. She had not been living there as it is described as being in the occupation of one Michael Redden. Fred is described as a gardener. It does not say whether he was a jobbing gardener, a market gardener or an employed gardener, for example at the Manor House. The price was £150.00. I would guess Fred Middleton was quite successful, whatever sort of gardener he was, because he persuaded William Bowyer, Merchant of Buckden, to lend him £100 to buy the cottage, so Bowyer must have thought him able to earn a steady income. He charged interest at the rate of 5%.

To secure this debt, Fred had to mortgage the property to Mr Bowyer. In those days a mortgage involved jumping through convoluted legal hoops. He conditionally surrendered his copyhold back to the Lord of the Manor, who then conditionally admitted William Bowyer to the roll, so if Fred had failed to pay the debt, Mr Bowyer would have been able to claim ownership of the property.

By 1882 Fred had paid off the debt and they all jumped through the legal hoops again to reverse the conditional surrender and admission.

In the late 1890s all was not well with Fred and in April 1897 he had to borrow £70 from Susan Middleton his sister. Susan however only got 2% interest.

The mortgage also refers to Fred having built another house on the land, now occupied by one John Skelton Fred was a bit of an entrepreneur as well as a good gardener.

In December 1897, Fred died. Perhaps he was ill when he borrowed the money and  it was to help him through his illness because he couldn’t work.

In 1898, Susan was admitted to the roll as the copyhold owner of both cottages. That Admission sets out, in part at least, the terms of Fred’s will, which he made on 17th September 1897. Perhaps by then he knew he did not have long to live. The Admission also describes Frederick Middleton as “Gentleman” so he has gone up in the world.

In the will he gave the cottages to Susan Middleton, who is described as his sister, but on condition that she suitably maintains and provides “a home for my mother” so long as she (Mother) shall live.

In 1909 Susan died, intestate. She was a spinster and the cottage was inherited by her eldest brother Charles Middleton, also a gardener, but living in Derby. By this time the Court is no longer held at The George in Buckden, but in Peterborough. There is no reference to the Homage being present.

Then in 1920 the property was sold at auction and we are lucky enough to have a copy of the auction particulars and the contract.

The auctioneers were Dilley Son and Read. The auction was held at The George and no doubt involved a pint or two, maybe even a glass of wine.

There were 2 houses were sold as one lot. One had a sitting room, Kitchen and Bedroom, pantry, barn and earth closet. It also had a yard with brick and tile wood place, carpenters shop and loft over. It was rented out to one Albert Wallis at 12/- (60p) per lunar month.

This cottage was bought by Gertrude Gale, widow of Buckden – presumably a member of the well known Gale family.

In 1922 copyhold was abolished and only 2 types of interest in land were recognised – freehold and leasehold. Copyholds were converted to freeholds, although certain manorial rights were preserved. These included rights to mines and minerals.

In 1929 Gertrude Gale sold the properties on again. They were bought by James Wooley a retired gamekeeper. For the first time, the freehold was conveyed, subject to the manorial incidents or rights. Mr Wolley paid less than Gertrude Gale had paid in 1920. House prices, at least in London went up by about 50% over the same period, so why the value dropped here, we don’t know.

In 1949, James died, having appointed Richard William Wooley to be his sole executor. There is no indication in the deeds what relation, if any, Richard was to James. He is described as a Railway Ganger, living at 6 Council Houses Holme.

In 1950 he sold one of the houses to his wife, for £150. Mrs Wooley then held onto the property until 1976, which brings us up to modern day property dealings. When she sold it, she was still living in Holme, so she had probably rented it out all this time.

She sold it to Dorothy Ivy Owens who was then living in Cranfield Way. She paid £3,600 for it, so there had been considerable property price inflation compared to the period from the 1929 to 1950.

I think Mrs Owens made a very good bargain, because 6 months after buying it, she mortgaged the property for £6,950. I suspect she used the money on doing it up and perhaps extending it.

But the Jameses were probably well pleased with their purchase, because in 1980, they sold it again to a Mr and Mrs Payne for £26,500. He is described as an agricultural labourer. So, from 1976 to 1980, its value rose by over 70%. It sounds a lot, but in those 4 years the RPI went up by 66%, so house prices only increased slightly more than inflation.

Buckden has many old properties and if any of our readers have any old deeds that they would be willing to lend, or even give, to Buckden History Society, we would be very grateful as it will add to our picture of the history of the village. Please contact This email address is being protected from spambots. You need JavaScript enabled to view it.